It turns out that sometimes there IS crying in baseball. In November, we received word that retired major league pitcher Roy Halladay had died in a plane crash in the Gulf of Mexico. Halladay left a tremendous impression on Blue Jay fans across Canada, as well as fans of the Philadelphia Phillies, where he pitched both a perfect game and playoff no hitter in 2010. My wife Catherine and I watched the Halladay tribute hosted by the Phillies during Spring Training. Halladay’s friends, family and colleagues attended the tribute and recounted their experiences with Roy throughout the years. It was tough for me to watch. As a tear streamed down my cheek, I looked over at Catherine and said “We need to make sure we’re in Toronto for Opening Day”.  END_OF_DOCUMENT_TOKEN_TO_BE_REPLACED 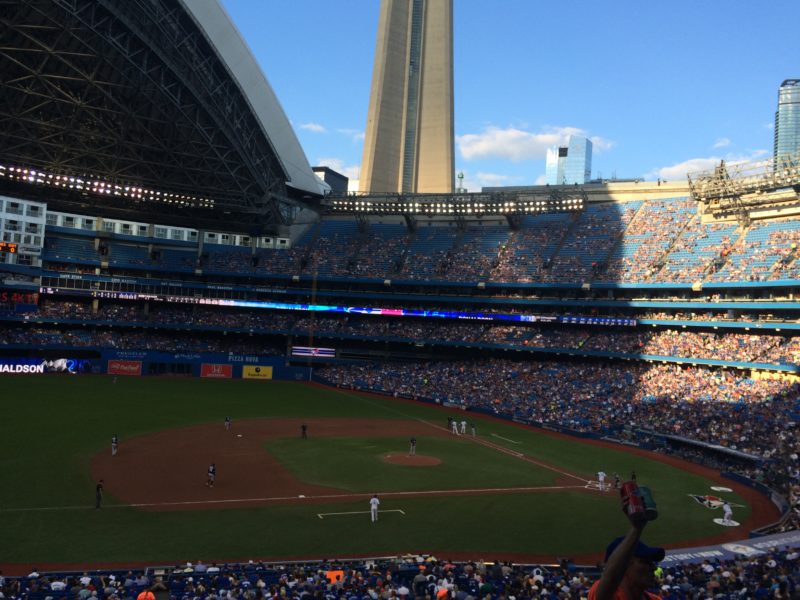 Investing your time following Major League Baseball can be a fruitless effort. As I’ve taken on more responsibilities it’s been more difficult to track the day to day happenings throughout the game. Baseball minutiae, like who is closing for the Arizona Diamondbacks, is replaced with remembering when bills are due and what time the exterminator is stopping by.  When I was single I would watch, conservatively, thirty hours of baseball a week.  When you factor in time spent managing my fantasy teams, planning ballpark trips and reading articles online I probably spent more time each week with baseball than at work or with loved ones. I can hear my wife now as I write this so let me say I am not complaining in anyway.  Getting married and being a father to two children, four cats and a dog is the best thing that ever happened to me.  It’s the life I wanted and am happy to be living it.  Having less free time has helped me prioritize my hobbies and my interest in baseball has grown. END_OF_DOCUMENT_TOKEN_TO_BE_REPLACED

The Rogers Centre was the only stadium in MLB still using dirt cutouts around the bases, until their 2016 Opener.  The dirt infield is the first renovation to the Rogers Centre since its’ debut during the 1989 season. END_OF_DOCUMENT_TOKEN_TO_BE_REPLACED 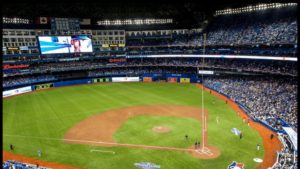 END_OF_DOCUMENT_TOKEN_TO_BE_REPLACED

There was a day when America’s pastime was ruled by an organization north of the border. This organization drew over 4 million fans for 3 consecutive seasons (1991 through 1993) and won back-to-back World Series Championships (1992 and 1993). The Toronto Blue Jays moved into Rogers Centre (formerly SkyDome) on June 5, 1989. It was the dawning of a new era in Major League Baseball. Rogers Centre was not only the first retractable roof ballpark in North America, but it was also the first ballpark with the intention of being an entertainment center. Rogers Centre was the home of a Hard Rock Cafe, an arcade and a hotel, amenities that drew fans of all ages. With the CN Tower next door, one of the world’s tallest buildings at 1,815 feet, any visitor to the Rogers Centre was sure to experience more than just a baseball game. END_OF_DOCUMENT_TOKEN_TO_BE_REPLACED

April 28, 2012: Miami, Florida There are few instances in my life where procrastination has paid off. Waiting five years to share my Marlins Park experience is one of them. On Friday August 11th, Jeffrey Loria agreed to sell the Marlins to an … END_OF_DOCUMENT_TOKEN_TO_BE_REPLACED

May 23, 2010: Minneapolis, Minnesota Minnesota, Land of 10,000 Lakes and one of the finest ballparks in Major League Baseball. Target Field made its debut in 2010 and ushered in a return to open-air baseball for the Minnesota Twins. The Twins’ … END_OF_DOCUMENT_TOKEN_TO_BE_REPLACED

April 17, 2009: Queens, New York Since becoming a Mets fan in 1988, I’ve followed them through the highs and lows of the past 28 years. Unfortunately, the highs have not been as high as the lows have been low. This was on display during the Mets’ … END_OF_DOCUMENT_TOKEN_TO_BE_REPLACED

August 14, 2008: The District of Columbia Since MLB relocated and rebranded the Expos from Montreal in 2005, the Nationals have carved out a niche in the nation’s capital. The Nationals played their first three seasons in the District at RFK … END_OF_DOCUMENT_TOKEN_TO_BE_REPLACED