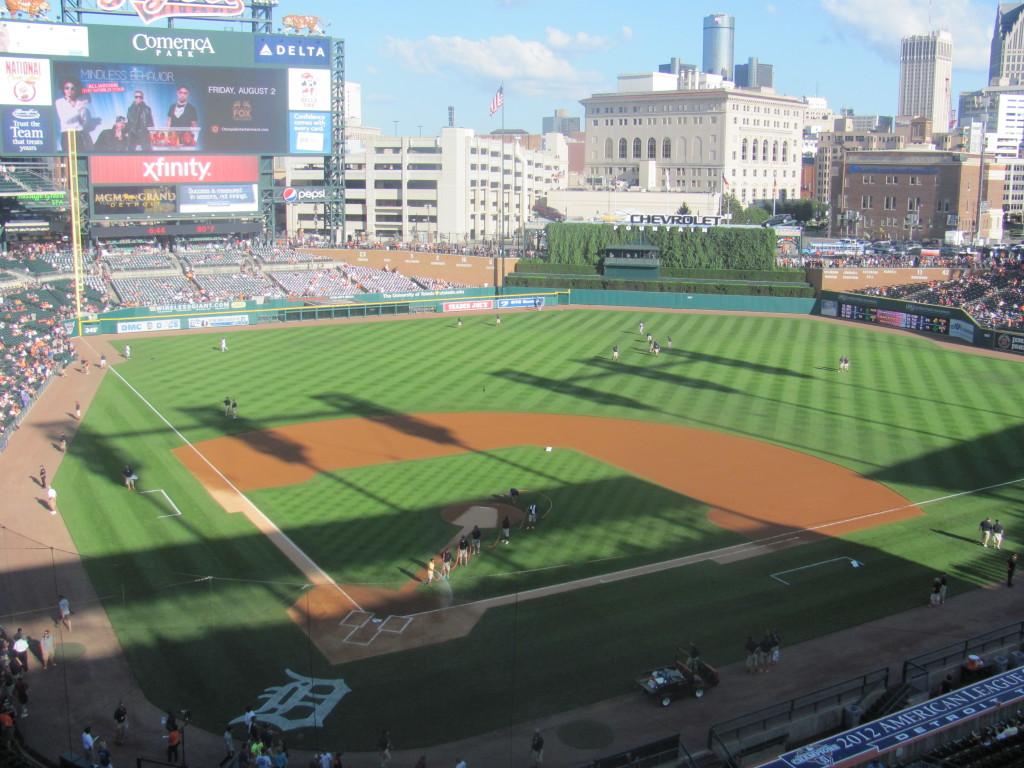 Lubec, Maine is the easternmost town in the contiguous United States and is the closest continental location to Africa in the United States.  It is also home to Effectively Wild listener and Tony Kornheiser Little Isaac Watson Stephenson. (La Cheesiere!) The closest MLB ballpark to Lubec is Fenway Park, a mere 350 miles away. This fact does not stop Isaac from following his Detroit Tigers. END_OF_DOCUMENT_TOKEN_TO_BE_REPLACED 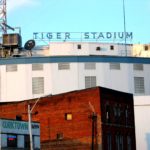 A highlight of my Ballpark Tour was visiting the site of old Tiger Stadium in 2004, when the grandstands and facade stood, 4 seasons after the Tigers played their final game on the corner of Michigan & Trumbell.  The city of Detroit, like many once industrial cities, has struggled over the past 30 years.  Factories close, jobs head out of town and residents who have the means to move do so.  Tiger Stadium was a part of Detroit’s oldest neighborhood, Corktown, it’s the one ballpark I feel I missed visiting.  Known for its’ obstructed views throughout the upper and lower grandstand due to columns, and tight dugouts Tiger Stadium also placed fans closer to the game.  Due to the lack of financial resources the city of Detroit was unable to tear down Tiger Stadium until 2009.

Demolition crews cleared almost all of Tiger Stadium’s façade and grandstands, leaving a few entrance gates and famed flag pole in centerfield, 440 feet from home.  The grounds of Tiger Stadium were left, unkempt until a ground of volunteers who called themselves the Navin Field (Tiger Stadium’s original name) Grounds Crew began cutting the grass and maintaining the field for rec leagues and site seeing opportunities.  Technically they were breaking the law however the Navin Field Grounds Crew were also doing the community a service, it was a must stop on my trip back to Detroit in 2013.

Despite the lack of grandstand and facade I could feel the history of Tiger Stadium on that Saturday afternoon.  Growing up in the 1980’s I thought about Sweet Lou Whitaker and Alan Trammell turning double plays as they won the 1984 World Series, the field remained the same. I walked the outfield and infield dirt imagining the crowd roar on a Kirk Gibson home run and laugh when the “Bird” Mark Fidrych was on the mound. By 2013 the corner of Michigan & Trumbell had been renamed Ernie Harwell Park after the Hall of Fame Tigers announcer.  Harwell was so popular that after being let go for the 1992 season; was brought back for the 1993 season after current owner Mike Illitch took control of the team.  Ernie’s love for the Tigers and the game of baseball came through his broadcasts, he retired at 91.

When I make my third trip to Detroit, the corner of Michigan & Trumbell will be the new home to Detroit Police Athletic League’s (PAL) Headquarters, the field will be renamed Willie Horton Field of Dreams after the former Tiger and Detroit native.  After closing its doors following the 1999 season it took Detroit city leaders and developers 14 years to put a realistic development plan in place for Tiger Stadium.  Creating more after-school and summer opportunities for the youth of Detroit is a great way to re-purpose the historic site; my only issue is the PAL will replace the grass and dirt of Tiger Stadium with turf.  Hopefully those who utilize the field will be able to learn and appreciate all the history that took place on those grounds. 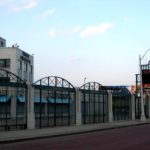 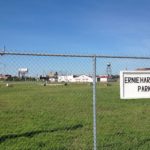 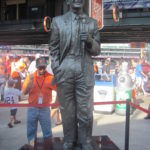 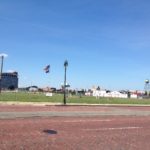 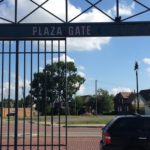 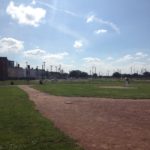 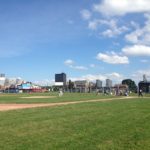 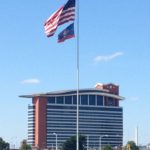 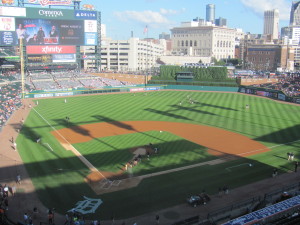 END_OF_DOCUMENT_TOKEN_TO_BE_REPLACED

September 28, 2003, the final day of the 2003 Major League Baseball regular season: ESPN cut away from regularly scheduled programming to bring its audience the final inning of the Detroit Tigers vs. Minnesota Twins game. The Twins had already clinched the American League Central Title and were assured of playing the New York Yankees in the Division Series. The story in Motown was the hometown Tigers, who were three outs away from avoiding baseball infamy. As the Tigers recorded the final out of the 9-4 win, the home crowd erupted and the Tigers ran out on to the field as if they had won their Division. It prompted Tigers announcers Mario Impemba and Rod Allen to toss away their 1962 New York Mets footage and celebrate the end to an auspicious season. Since that “historic” September afternoon, the Detroit Tigers organization stepped up its efforts to upgrade the team by signing catcher Ivan Rodriguez, outfielder Magglio Ordonez, and relief pitcher Troy Percival. These players brought a winning attitude to a city rich in baseball history, one that hosted the 2005 All-Star Game. END_OF_DOCUMENT_TOKEN_TO_BE_REPLACED 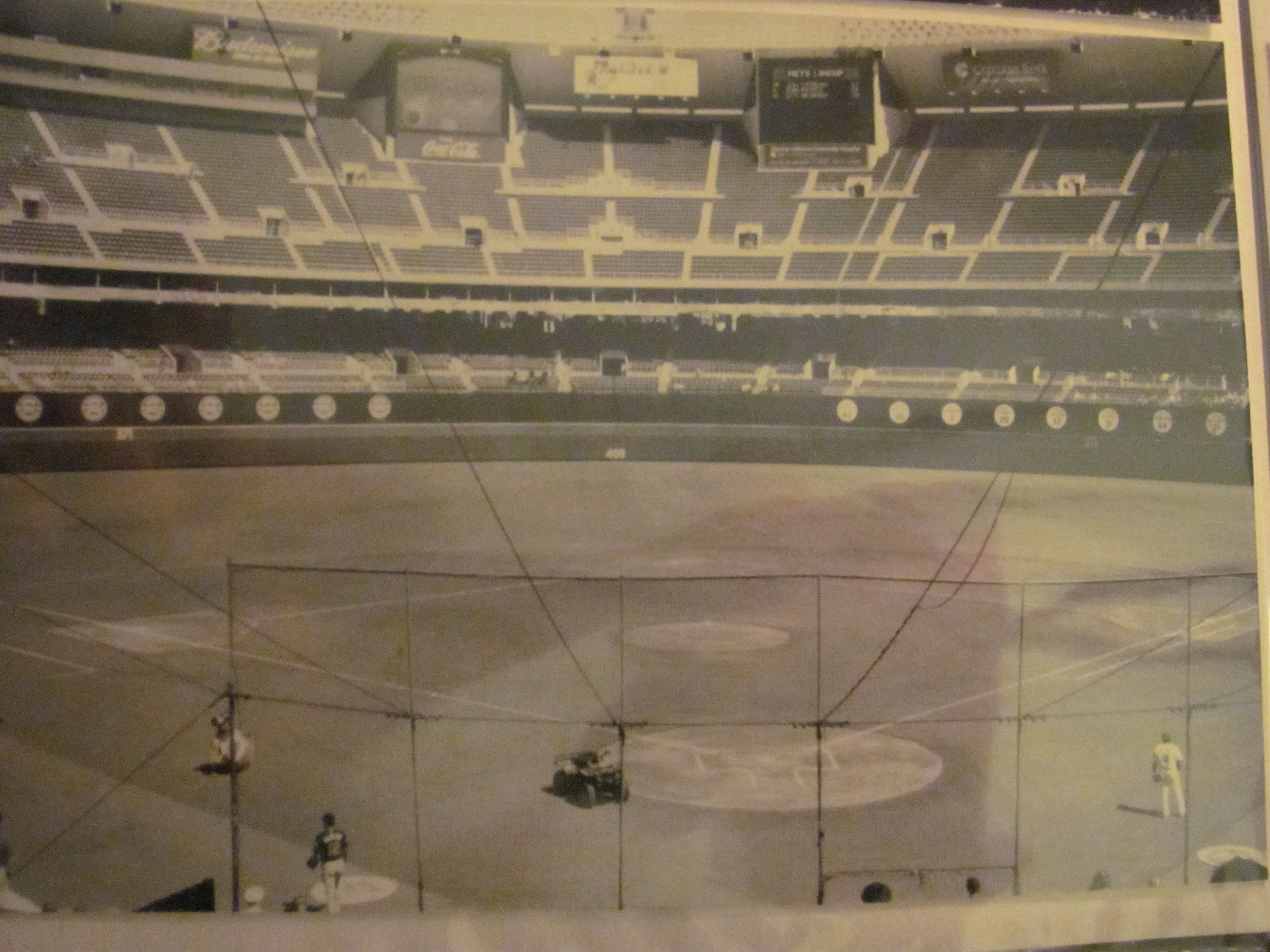 September 8, 2002: Philadelphia, Pennsylvania Although Mike and I have visited Veterans Stadium, home of the Philadelphia Phillies from 1971 to 2003, my first visit was with Rachel.  Rachel had never attended a baseball game before that … END_OF_DOCUMENT_TOKEN_TO_BE_REPLACED 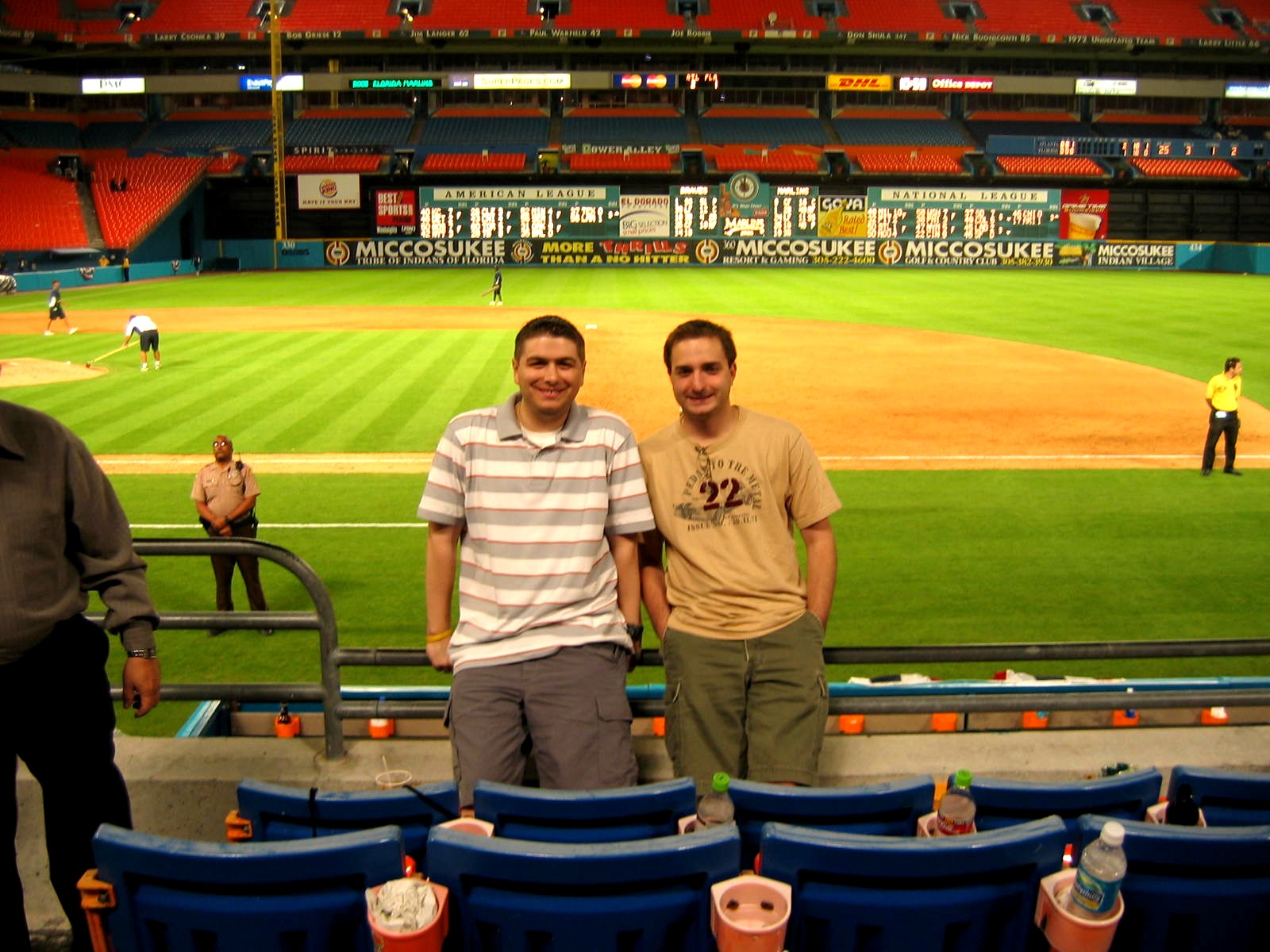 April 6, 2005: Fort Lauderdale, Florida Heading down to Florida in April sounded like a great idea for the 2005 Ballpark Tour. Mike and I started to plan our trip in early December. What better way to ring in the 2005 season than spending time … END_OF_DOCUMENT_TOKEN_TO_BE_REPLACED 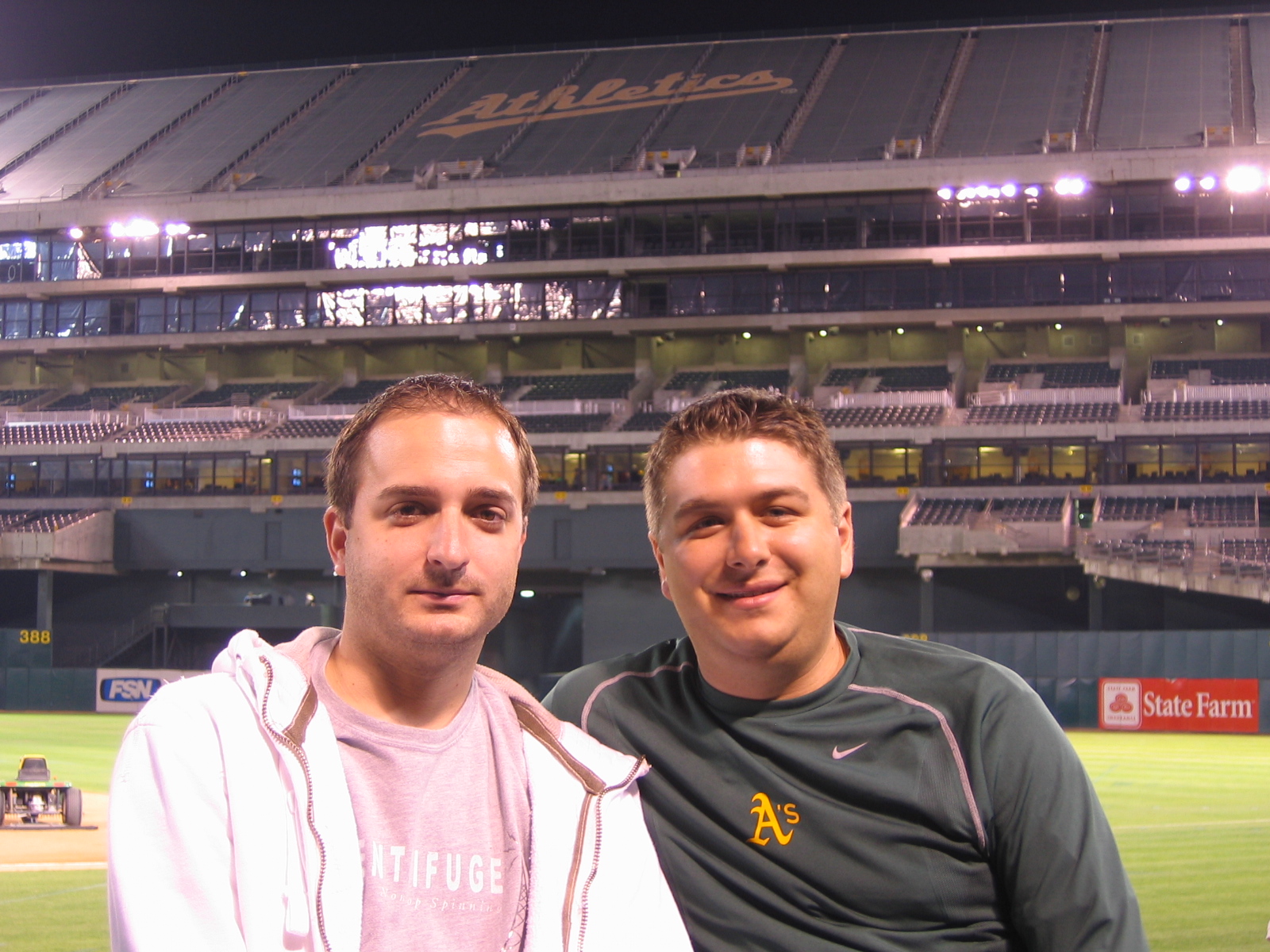 August 23, 1989: Queens, NY Shea Stadium was more than just the home of my New York Mets; it was where my love for the game of baseball began. I can remember it like it was yesterday. My father was on vacation and bought two mezzanine reserve … END_OF_DOCUMENT_TOKEN_TO_BE_REPLACED

July 25, 2003: Phoenix, Arizona My trip to Arizona was not only an opportunity to attend an Arizona Diamondbacks game at Chase Field (formerly Bank One Ballpark aka the BOB), but also a chance to spent time with a part of my family that I do not … END_OF_DOCUMENT_TOKEN_TO_BE_REPLACED