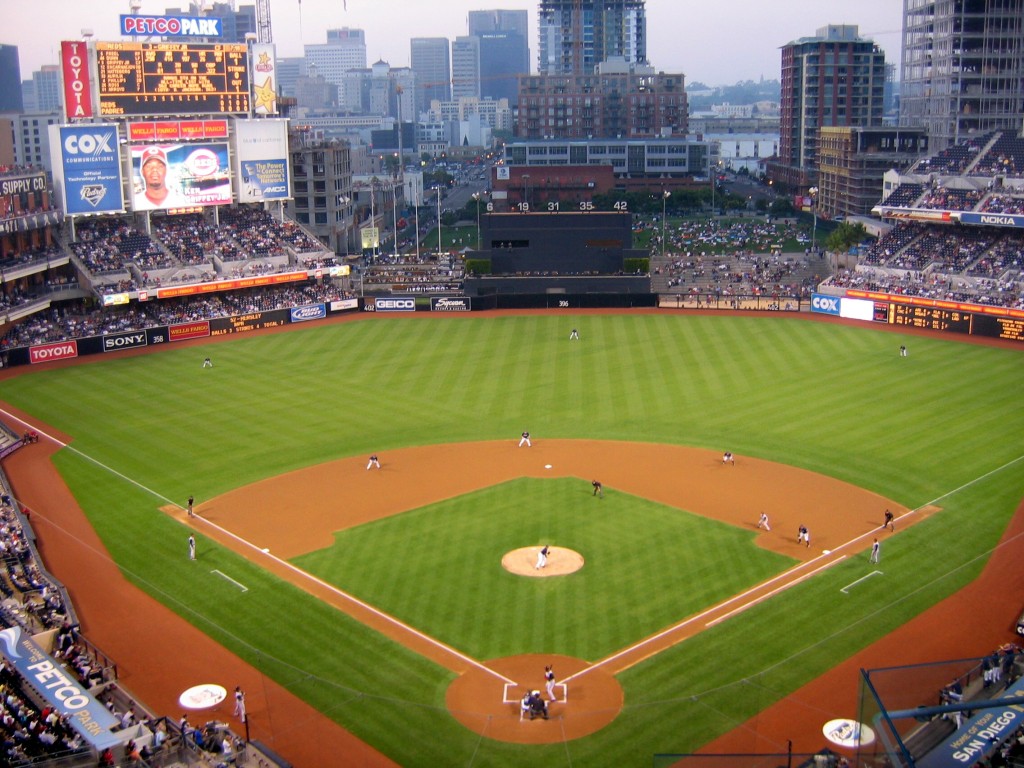 Petco Park’s LF line is unlike any other in MLB. The 100-year Western Metal Supply Co building was included in Petco’s construction rather than being torn down. It houses a number of restaurants, the Padres team store and a Party Deck. The Ballpark is centrally located in San Diego’s Gas Lamp District and includes a beach area for kids in CF as well as a Park at the Park where fans can enjoy the game while enjoying the perfect weather. Petco Park is designed for the laid back San Diegan in mind.

I met Shane Talbot through the Ballpark Stampeders Facebook group, 1,400+ fellow ballpark fans sharing their trips and stamps thanks to Tim Parks.  Shane started his quest to see all 30 ballparks last year. He made his first trip to Fenway earlier this season and met up with fellow Stampeder Paul Rodriguez.

END_OF_DOCUMENT_TOKEN_TO_BE_REPLACED

Since its’ debut in 2004 Petco Park has epitomized California cool with its’ Park @ the Park and Beach features.  As “America’s Finest city” prepares to host the 2016 MLB All-Star Game Petco Park has undergone a few upgrades to increase social space and honor the Padres past. END_OF_DOCUMENT_TOKEN_TO_BE_REPLACED 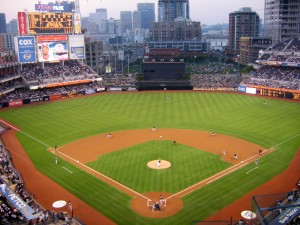 Self-proclaimed as “America’s Finest City,” San Diego has grown from a Naval city into the second largest city in California. Its combination of perfect weather and laid-back atmosphere has provided an oasis to those looking for a change of pace. After spending two nights in San Diego, I can say that I have never been to a city quite like it. This was evident as Mike and I made our way to Petco Park, home of San Diego Padres and a vital part of downtown San Diego’s revitalization. END_OF_DOCUMENT_TOKEN_TO_BE_REPLACED

April 28, 2012: Miami, Florida There are few instances in my life where procrastination has paid off. Waiting five years to share my Marlins Park experience is one of them. On Friday August 11th, Jeffrey Loria agreed to sell the Marlins to an … END_OF_DOCUMENT_TOKEN_TO_BE_REPLACED

May 23, 2010: Minneapolis, Minnesota Minnesota, Land of 10,000 Lakes and one of the finest ballparks in Major League Baseball. Target Field made its debut in 2010 and ushered in a return to open-air baseball for the Minnesota Twins. The Twins’ … END_OF_DOCUMENT_TOKEN_TO_BE_REPLACED

April 17, 2009: Queens, New York Since becoming a Mets fan in 1988, I’ve followed them through the highs and lows of the past 28 years. Unfortunately, the highs have not been as high as the lows have been low. This was on display during the Mets’ … END_OF_DOCUMENT_TOKEN_TO_BE_REPLACED

August 14, 2008: The District of Columbia Since MLB relocated and rebranded the Expos from Montreal in 2005, the Nationals have carved out a niche in the nation’s capital. The Nationals played their first three seasons in the District at RFK … END_OF_DOCUMENT_TOKEN_TO_BE_REPLACED