For some fans Opening Day is the start of the baseball season, but for me the announcement of the next season’s schedule is when I start thinking about the upcoming season. The release of the MLB schedule, usually in September, offers 2,430 opportunities to plan time out at the ballpark six to twelve months in advance.

Citizens Bank Park was the place to be during the Phillies run of five consecutive National League East titles (2007-2011).  Now, as the Phillies rebuild, it’s the place to purchase below face-value tickets from season ticket holders on StubHub which I had the pleasure to do on May 6th.  Fellow Ballpark Nerd Phil joined me in the Hall of Fame Club for the Phillies match-up with the 2016 National League East champion Washington Nationals.  The Hall of Fame Club offers fans the best of both worlds, comfortable seating with cover and the option to walk inside and warm up or if you’re in the mood purchase Crab Fries. Crab Fries might be my favorite ballpark concession throughout MLB, crinkle cut fries with an Old Bay like seasoning and melted cheese. Heaven in a cup. 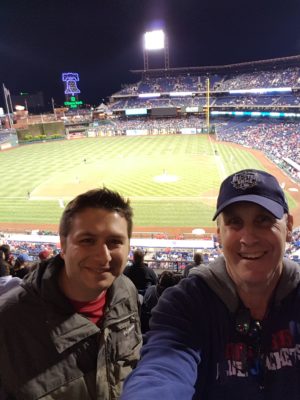 The Phillies sent hard throwing Vince Velasquez to the mound against the high-powered Nationals offense. The Phillies caught a break during the weekend series with Nationals right fielder Bryce Harper sidelined due to a sore wrist. However this did not stop the Nationals from putting six runs on the board against Velasquez. Home runs by Ryan Zimmerman and Anthony Rendon accounted for five of the runs. The Rendon home run in the sixth not only put the game out of reach, but will be remembered in Ballpark Nerd lore as being the Shot Heard Round Section 227 thanks to Phil’s prediction prior to Rendon stepping to the plate. Overall Velasquez did not pitch poorly – two bad pitches in 7 innings ruined the 8 strikeout no walk performance. Final: Nationals 6, Phillies 2 in front of “21,298” fans in attendance. 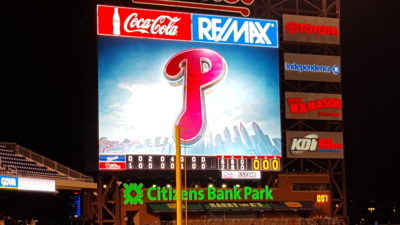 Regardless of the teams playing or venue, attending baseball serves as a great diversion and grounding exercise for me in my attempt to balance a hectic lifestyle. Worrying about the chores I need to finish at home or the e-mails I did not get to at the office doesn’t cross my mind when I am at the ballpark. The best part of attending games is introducing all that baseball has to offer friends and family both young and old.

April 28, 2012: Miami, Florida There are few instances in my life where procrastination has paid off. Waiting five years to share my Marlins Park experience is one of them. On Friday August 11th, Jeffrey Loria agreed to sell the Marlins to an … END_OF_DOCUMENT_TOKEN_TO_BE_REPLACED

May 23, 2010: Minneapolis, Minnesota Minnesota, Land of 10,000 Lakes and one of the finest ballparks in Major League Baseball. Target Field made its debut in 2010 and ushered in a return to open-air baseball for the Minnesota Twins. The Twins’ … END_OF_DOCUMENT_TOKEN_TO_BE_REPLACED

April 17, 2009: Queens, New York Since becoming a Mets fan in 1988, I’ve followed them through the highs and lows of the past 28 years. Unfortunately, the highs have not been as high as the lows have been low. This was on display during the Mets’ … END_OF_DOCUMENT_TOKEN_TO_BE_REPLACED

August 14, 2008: The District of Columbia Since MLB relocated and rebranded the Expos from Montreal in 2005, the Nationals have carved out a niche in the nation’s capital. The Nationals played their first three seasons in the District at RFK … END_OF_DOCUMENT_TOKEN_TO_BE_REPLACED