I usually wait to purchase baseball tickets until game day but when the Phillies 2017 promotions schedule was released I knew if I wanted good seats for the August 12th Wall of Fame night against the Mets I had to act fast. Thanks to StubHub I was able to find first row tickets in the Terrace Deck on February 10th; now the only thing to find out was who would be inducted into the Wall of Fame. Wall of Fame and Alumni Weekend has served as a mid-season highlight for the Phillies as they continue to rebuild. This year fans voted for Pete Rose to join fellow Phillies legends.  Rose was the final piece to the Phillies 1980 World Series team playing the way blue collar Phillies fans could appreciate. However Rose’s off field exploits came back to bite him a few days prior to induction when it was reported that while he was playing for the Cincinnati Reds Rose engaged in an inappropriate relationship with a teenager. Induction cancelled! Pete Rose bobbleheads destroyed! Time for Wall of Fame Ceremony Plan B. 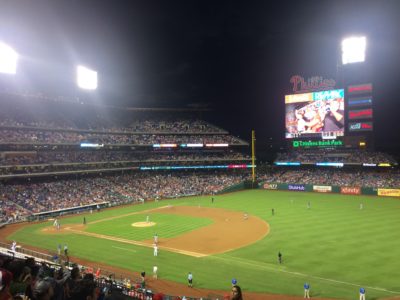 The Phillies shifted gears after announcing the Rose cancellation focusing on the memories of Wall of Famers Jim Bunning, Dallas Green and Darren Daulton who lost their lives during the year. Despite the current Phillies fifth place standing the Wall of Fame ceremony brought out 34,131 fans to Citizens Bank Park, the 5th highest crowd this season to date.  The Wall of Fame ceremony wasn’t the only pregame excitement. After having him penciled in the two hole in the pregame lineup the Mets traded second baseman Neil Walker to the Milwaukee Brewers. In hindsight they would have benefited from holding off on trading Walker’s bat until the Mets wrapped up their game against Phillies ace Aaron Nola.

Heading into the game I had the sense the Phillies would win behind Nola and I turned out to be correct.  Nola peppered the bottom half of the zone throughout his 7 innings. More than half of his 103 pitches were at the knees or below. After allowing a solo home run to Yoenis Cespedes in the 4th inning Nola did not allow a hit the remainder of his start. The Phillies offense struggled early against Mets southpaw Steven Matz until breaking through with four well-placed singles in the 5th inning taking a 2-1 lead. That’s all the support Nola needed as he cruised surrendering 2 hits and striking out 8. An insurance run in the 8th gave the Phillies some breathing room. Final score Phillies 3 Mets 1. 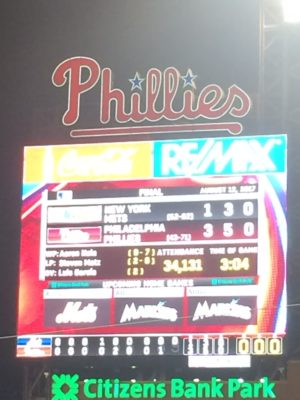 Saturday’s start was Nola’s 10th consecutive allowing two runs or less; a Phillies record dating back to 1893. Aaron Nola is one of the building blocks of the next winning Phillies team. Hopefully both teams can turn their fortunes around in the standings and revive the I-95 rivalry because who really can stand seeing the Washington Nationals win the East.  Until next season Citizens Bank Park!

April 28, 2012: Miami, Florida There are few instances in my life where procrastination has paid off. Waiting five years to share my Marlins Park experience is one of them. On Friday August 11th, Jeffrey Loria agreed to sell the Marlins to an … END_OF_DOCUMENT_TOKEN_TO_BE_REPLACED

May 23, 2010: Minneapolis, Minnesota Minnesota, Land of 10,000 Lakes and one of the finest ballparks in Major League Baseball. Target Field made its debut in 2010 and ushered in a return to open-air baseball for the Minnesota Twins. The Twins’ … END_OF_DOCUMENT_TOKEN_TO_BE_REPLACED

April 17, 2009: Queens, New York Since becoming a Mets fan in 1988, I’ve followed them through the highs and lows of the past 28 years. Unfortunately, the highs have not been as high as the lows have been low. This was on display during the Mets’ … END_OF_DOCUMENT_TOKEN_TO_BE_REPLACED

August 14, 2008: The District of Columbia Since MLB relocated and rebranded the Expos from Montreal in 2005, the Nationals have carved out a niche in the nation’s capital. The Nationals played their first three seasons in the District at RFK … END_OF_DOCUMENT_TOKEN_TO_BE_REPLACED