I met Erica Reniff through the BallPark Stampeders Facebook group. When she is not keeping track of East Coast stamps Erica is working through her quest to visit all 30 ballparks as well as the many minor league parks within driving distance of Central New York. Erica shares her fandom in this edition of Nine with the Nerd.

I’ve been a fan for as long as I can remember. My grandparents would often take care of me when I was a child, and my grandmother was (and still is) a huge Yankees fan. She passed down a lot of her memorabilia, cards, and whatnot. I definitely learned a love of the game from her. Sadly, I don’t remember a lot about my “young fandom”… and my parents themselves never paid much attention to baseball. There is a particular story that gets brought up from time to time about my grandmother talking my mother and father into bringing me to a Yankees game back at the old stadium in… I think it was 1994. We sat somewhere on the very top tier of the stadium and were barely able to see anything. It was a pitching duel that game though, apparently, and the ONLY hit the entire game was a Mattingly home run.

My parents were probably bored to tears the entire game, but I imagine my grandmother was on the edge of her sit for it all… waiting for one of the Yankees, probably Mattingly himself, to come up big. 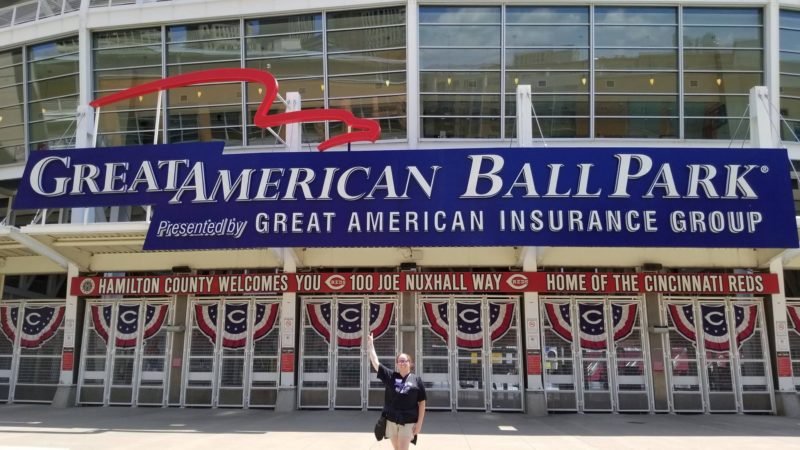 Officially, the above mentioned game in 1994 was probably my first. There was also a visit to Camden Yards when I was younger… would have been sometime from 1992 to 1994. Again, my parents weren’t very enthusiastic about the game. There aren’t a lot of photos or memories from those visits to stadiums when I was a child. We usually attended when visiting friends or family who WERE enthusiastic about baseball and wanted to give me the experience.

Ultimately, it’s kind of why I only decided to start counting games within the last couple years. My first visit to Safeco Field some years ago *feels* like it was my first MLB game attended, because it was really the first time I attended a game on my own terms, took photos, and really had the full baseball experience. 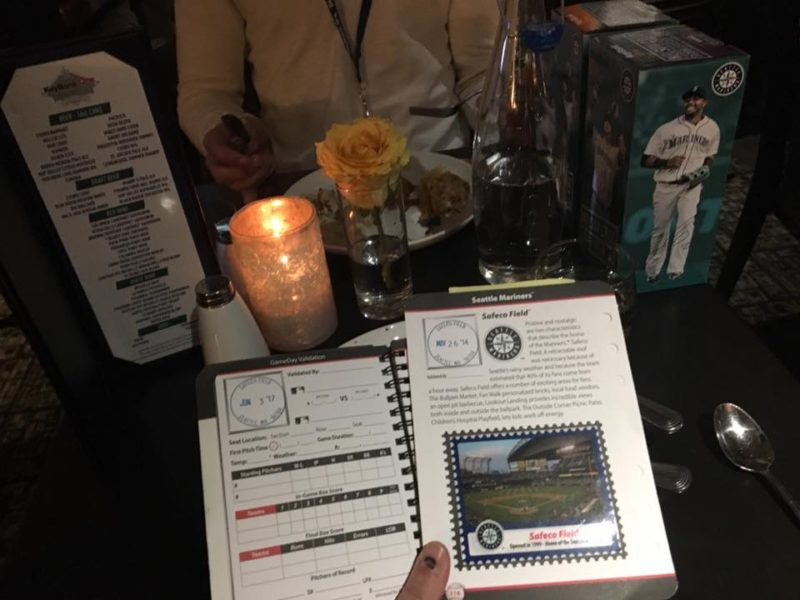 I don’t live within less than a 4 hour drive of any MLB teams… Philly is about 4 hours, Toronto is about the same, and the two NY teams are about 4 ½, so actually GETTING to major league games is something of a big deal. I’ve probably only been to about 25 major league games in my life, 10 team ballparks of which I’ve re-visited (some more than others) so far as part of the BallPark Pass-Port program. I’m expecting to get to at least another 4 new stadiums this year… 5 if I can figure out a weekend visit to Toronto. That’ll get me officially halfway through my “Quest for 30” experience. Since I’ve only been really counting and stamping since 2014, I’m considering that a win. 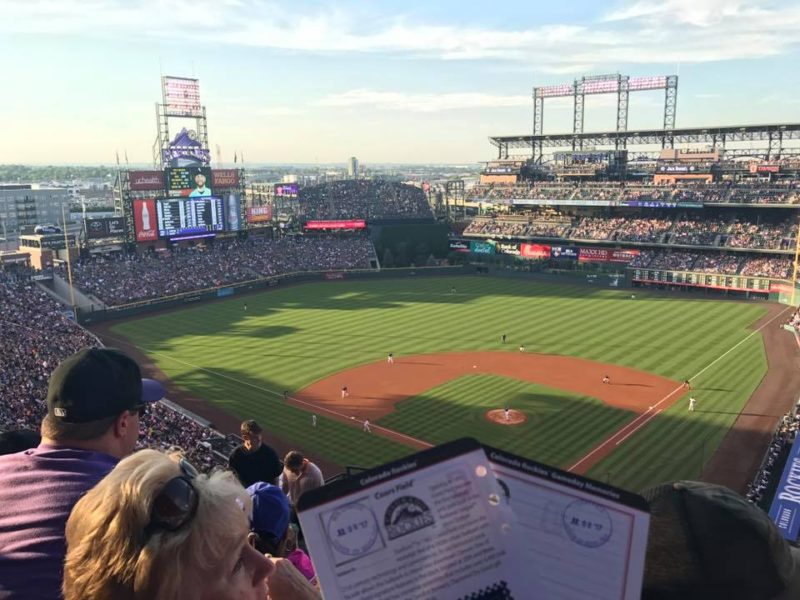 The NY Yankees will always be my favorite team… blame my grandmother. Haha. The interesting thing about growing up as a Yankees fan though was getting a lot of people who would say “I bet you only root for the Yankees because of Derek Jeter.” There was a lot of questioning of a young female fan and the actual knowledge of the game, unfortunately. I think it made me want to become extra knowledgeable about the team – and baseball in general.

Yankees aside, I also consider the Seattle Mariners a team I can root for without too much guilt. I’ve visited Seattle so many times now that it feels like a second home. Plus, my best friend lives out there. We’ve tried to “co-celebrate” our birthdays a couple times now by going to Mariners games… including Diamond Club seats on two of those visits. 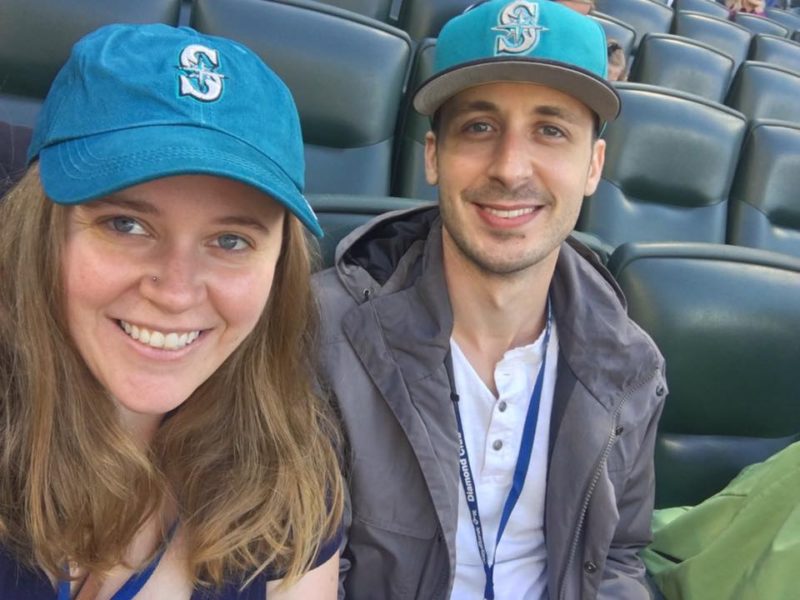 I count 10 official visits at this point, including Yankee Stadium, Camden Yards, Nationals Park, Citizens Bank Park, and so on.

I’ve been to a couple other stadiums (AT&T Park, Rogers Centre, etc), but have never watched actual GAMES from those stadiums. Again, hoping to get to another 4 or 5 ballparks in 2018. We’ll see if I can hit the halfway marker by the end of 2018. 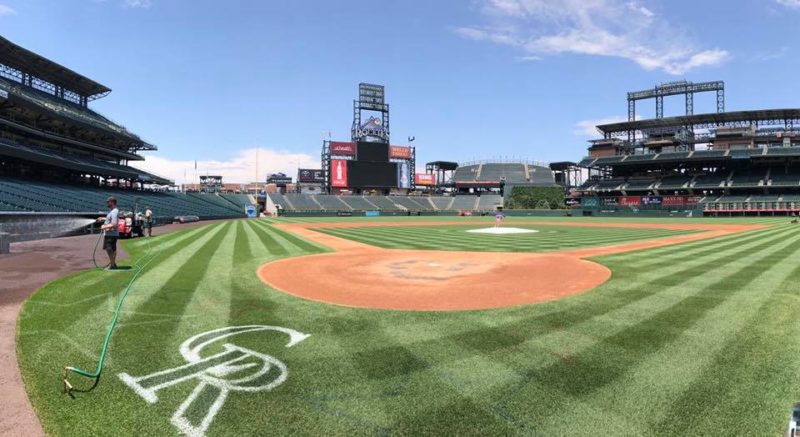 Absolutely! And as many minor league ballparks as I can get to as well… because, let’s be honest, there are plenty of minor league parks out there to keep a person busy and traveling around. 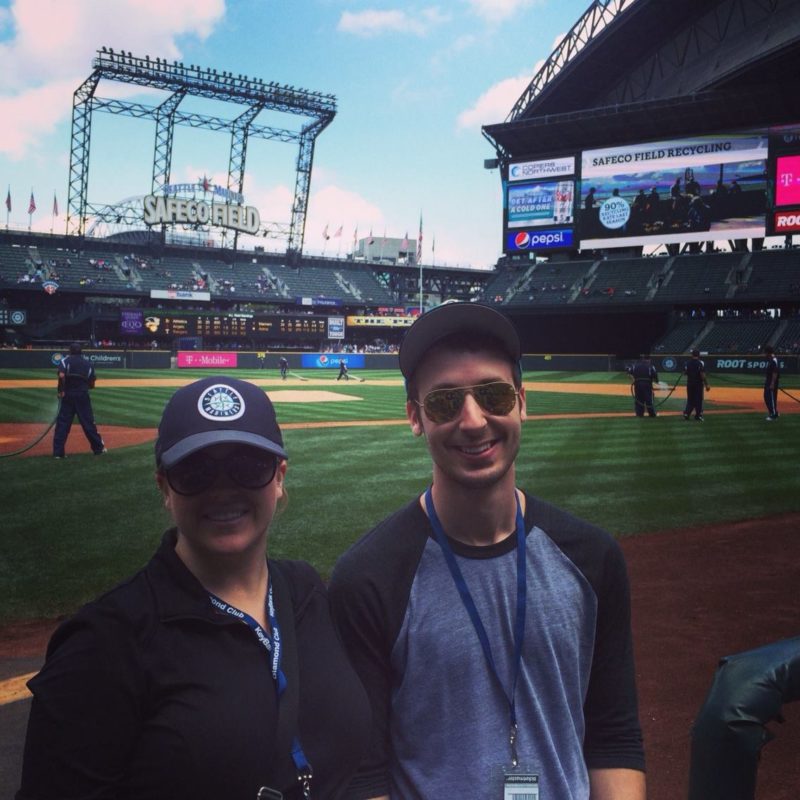 Coors Field, then Progressive Field, a Dayton Dragons minor league game, Great American Ball Park, and PNC Park (as part of a single road trip experience), and then Nationals Park (re-visit) with my cousin and her husband. A variety of other minor league games thrown into the mix as well… including seeing my “home” minor league team, the Rochester Red Wings, along with the Syracuse Chiefs, Binghamton Mets… er… Rumble Ponies, Scranton/Wilkes Barre RailRiders, LeHigh Valley Iron Pigs, and so on.

My trip to Denver was for the first annual Denver Mini Stampede, which was a great time – so much fun meeting everyone and wallowing in the awesomeness that is the Rockies baseball experience.

I took a solo road trip that was built around the STAMPede. I was hoping to start it off with an Akron Rubber Ducks game, buuuuuuuuuut I slept in a little too late to make the 5+ hour drive to Akron for that game by the noon-ish start time. D’oh! Instead, I drove the 6-ish hour drive to Cleveland for an Indians night game against the Yankees (in which Kluber destroyed the Yankees… *sigh*). After an overnight to recover, I made my way to Dayton the next day for the Dayton Dragons mini STAMPede put on by Tim Parks. After the game, I drove to Cincinnati and attended the official 2017 STAMPede the next day. A visit to Pittsburgh to see the Pirates came the day after Cincinnati… and I was hoping to see the Williamsport CrossCutters play on the final leg of my drive home, but the game got rained out. I’ll have to make it down to Williamsport in 2018 for a game… have to check them off my list of stadiums visited, and the two hour drive isn’t bad at all.

As mentioned above, I also got to Nationals Park again. For the last couple years, I’ve spent a long weekend with my cousin and her husband where our mission is to visit a new stadium together. If I can swing it, I also try and get us Club seats for the ballpark of choice. Last year, we drove the 2+ hours from their home outside Harrisburg, PA in order to see a game at Nationals Park and there ended up being a 3 hour rain delay. We had arrived at Nationals Park and NOBODY was in the stands… everybody was in the concourse area. It was still before game time, of course, but that seemed odd. Suddenly, we see the big screen with an announcement that incoming weather means MLB has called a delay for the game. Quickly, the skies turned almost black and it became a torrential downpour outside. We had Club level tickets, so my cousin, her husband, and I all grabbed various concessions and made ourselves comfortable in the Club area of the concourse… but there were so many people inside the Club space that we ended up stepping out into the open concourse area just so that we could get some fresh air. My cousin, ever the social media guru, got a kick out of documenting the experience via her Instagram stories.

… after the 3 hour rain delay, the field was prepared and then the game got started. That was the game that Bryce Harper ended up injuring himself in the first inning by slipping on the first base bag (still wet from the weather, we all assumed). Honestly, we were all surprised that he didn’t end up tearing a ligament or something more horrendous (if I remember correctly, he ended up with a bone bruise after hyperextending his knee). The way his ankle looked as he slipped, and then how that caused the rest of his leg, knee, and general body to react… it looked absolutely nightmarish.

I’m not able to make too many plans for 2018 yet due to some uncertainty with work timelines and whatnot… but I’ve staked my claim on some time in May for visiting Chicago (for both teams) and Milwaukee. I also have a plan to visit Fenway in September via bus tour. I used to drive to Boston regularly and it’s a 5 ½+ hour/one way drive for me on a good day… but I’ve been stuck in construction on the Mass Turnpike before that’s turned it into a 9 hour drive one way. After driving myself so many times? I am MORE than happy to let someone else make that drive for me this time around. Haha.

And, as mentioned previously, hoping to get to Rogers Centre sometime in 2018. That’s a bit more TBD in terms of timing, but it’ll probably be later in the season. I’m going to Toronto at the end of March but, unfortunately, won’t be able to attend a game while there. 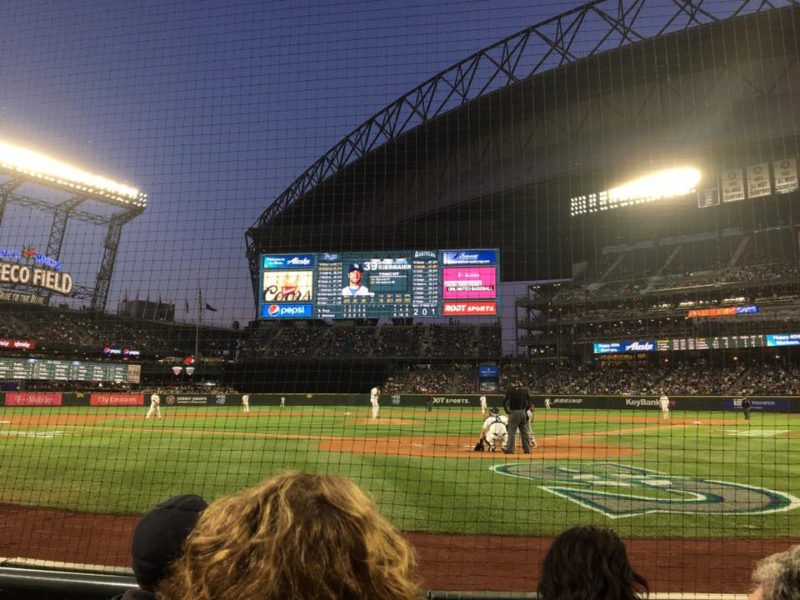 Ugh… that’s so tough! My first visit to Safeco Field with my best friend always stands out. It was a Memorial Day game as well, so it felt like an especially great dose of “Americana” to be there with true fans. There were some special dedications/remembrances on that day, and we got to appreciate all the veterans in attendance as well.

Starting the annual ballpark visits with my cousin and her husband a couple years ago was fantastic too though. Her husband grew up in PA and was a lifelong Phillies fan AND we visited on alumni night, so he got to see favorite players like Mike Schmidt take the field before the game. We sat a couple rows behind home plate in the Phillies Diamond Club space and just all had a really great time. Originally, we hadn’t expected to make visiting a ballpark an annual tradition… but that experience cemented it. The next year, we went to Camden Yards and it’s all gone from there. Definitely memories that will be cherished forever!

April 28, 2012: Miami, Florida There are few instances in my life where procrastination has paid off. Waiting five years to share my Marlins Park experience is one of them. On Friday August 11th, Jeffrey Loria agreed to sell the Marlins to an … END_OF_DOCUMENT_TOKEN_TO_BE_REPLACED

May 23, 2010: Minneapolis, Minnesota Minnesota, Land of 10,000 Lakes and one of the finest ballparks in Major League Baseball. Target Field made its debut in 2010 and ushered in a return to open-air baseball for the Minnesota Twins. The Twins’ … END_OF_DOCUMENT_TOKEN_TO_BE_REPLACED

April 17, 2009: Queens, New York Since becoming a Mets fan in 1988, I’ve followed them through the highs and lows of the past 28 years. Unfortunately, the highs have not been as high as the lows have been low. This was on display during the Mets’ … END_OF_DOCUMENT_TOKEN_TO_BE_REPLACED

August 14, 2008: The District of Columbia Since MLB relocated and rebranded the Expos from Montreal in 2005, the Nationals have carved out a niche in the nation’s capital. The Nationals played their first three seasons in the District at RFK … END_OF_DOCUMENT_TOKEN_TO_BE_REPLACED