“THE CUBS ARE GOING TO THE WORLD SERIES! THE CUBS WON THE PENNANT!” These were the words Cubs fans had been waiting a lifetime to hear from their radio announcer Pat Hughes. At that moment, euphoria struck. I never thought I would ever see it. I have been a Cubs fan since 1989. I endured the mediocre 90’s, cheered on Sammy Sosa during his epic home run race with the Cardinals Mark McGwire, suffered through the shocking end to the 2003 NLCS, the disappointment of back to back NLDS sweeps in 2007 and 2008, and a painful but fruitful rebuild. This was as sweet as it gets. Little did I know that 22 hours later, it would get a little sweeter.

As I was winding down from the Cubs pennant-winning Game 6 win against the Dodgers, I received an email from the Cubs that was not like any other email I had received in the past. As I read the email, I realized I was selected to have an opportunity to purchase tickets to games 3, 4 or 5 of the World Series at Wrigley Field. I was completely stunned. I began scrambling to determine whether the trip from Pennsylvania to Chicago was feasible. As the hours passed, the trip started to feel like it was a major possibility. The next day, I logged into the Cubs website and was able to purchase Game 4 tickets. I then found a friend willing to join me on the adventure, plane tickets were booked, and a hotel room was secured. IS THIS REAL LIFE?!?!?

I might be a little biased when I say this, but Wrigley Field is one of the best venues to watch a baseball game. It’s always an amazing experience.  My favorite moment of every visit is being able to walk through the tunnel from the concourse area and seeing the field.  The green field, the brick outfield wall covered with ivy, the green manual scoreboard are breathtaking.  There is no place better to be to watch a baseball game, let alone a historic World Series game. 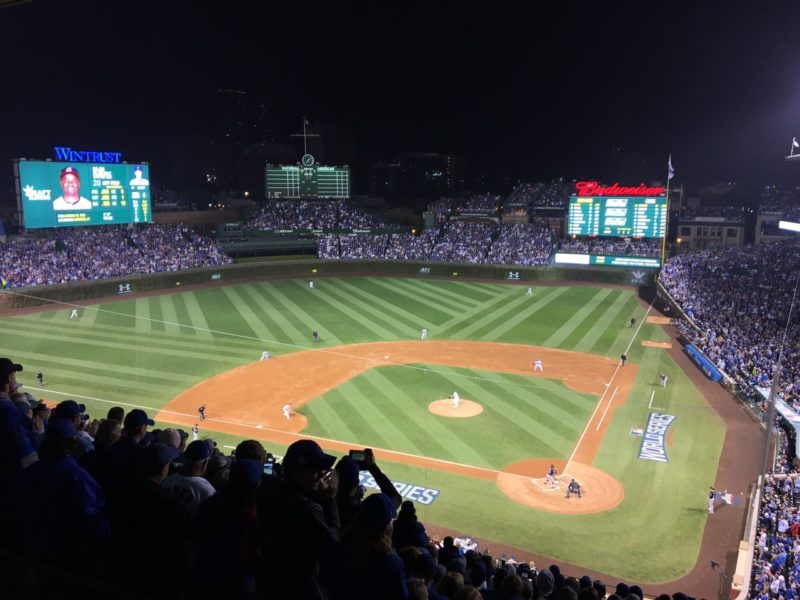 Wrigley Field had a buzz that I never experienced until that night.  The fans were ready for this moment; I was ready. John Lackey took the mound for warmups to Garth Brooks’ “Friends in Low Places”. The fans sung along. The first inning was LOUD. Lackey got through the first inning easily. When the Cubs batted in the first no fan sat down. Dexter Fowler led the game off with a double off Corey Kluber, later scoring on a single by Anthony Rizzo. Wrigley was shaking. Little did we know that would be the loudest point in the game. Cleveland came out and tied it on a leadoff home run and took the lead on a throwing error. Throughout the night, the crowd tried to get back into the game but were thwarted by Corey Kluber’s excellent pitching as well as clutch hits from Cleveland’s lineup. As the night progressed, it was obvious the Cubs were going to be down 3-1 in the World Series, but the experience was unforgettable. 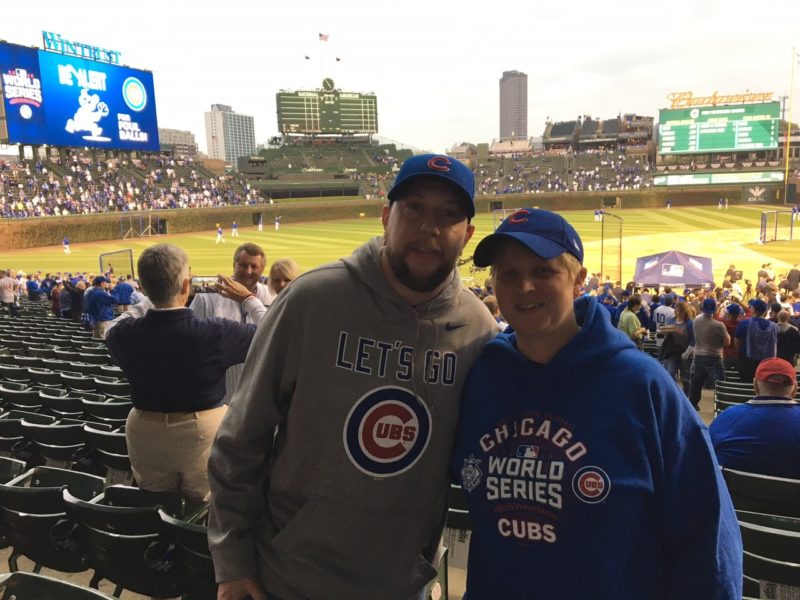 Fortunately, the Cubs fought back in the series and won an epic, dramatic Game 7 to win their first World Series in 108 years. I celebrated something that I never thought would happen. It would have been special regardless of how they won or whether or not I attended a World Series game. I’ll never forget attending Game 4 of the World Series at Wrigley Field. The experience I had that night was special. It reminded me that nothing is a given. This Cubs team has been built for a run of success, but if they make it back to the World Series, the experience will not be as special as it was during their curse busting run of 2016.

April 28, 2012: Miami, Florida There are few instances in my life where procrastination has paid off. Waiting five years to share my Marlins Park experience is one of them. On Friday August 11th, Jeffrey Loria agreed to sell the Marlins to an … END_OF_DOCUMENT_TOKEN_TO_BE_REPLACED

May 23, 2010: Minneapolis, Minnesota Minnesota, Land of 10,000 Lakes and one of the finest ballparks in Major League Baseball. Target Field made its debut in 2010 and ushered in a return to open-air baseball for the Minnesota Twins. The Twins’ … END_OF_DOCUMENT_TOKEN_TO_BE_REPLACED

April 17, 2009: Queens, New York Since becoming a Mets fan in 1988, I’ve followed them through the highs and lows of the past 28 years. Unfortunately, the highs have not been as high as the lows have been low. This was on display during the Mets’ … END_OF_DOCUMENT_TOKEN_TO_BE_REPLACED

August 14, 2008: The District of Columbia Since MLB relocated and rebranded the Expos from Montreal in 2005, the Nationals have carved out a niche in the nation’s capital. The Nationals played their first three seasons in the District at RFK … END_OF_DOCUMENT_TOKEN_TO_BE_REPLACED