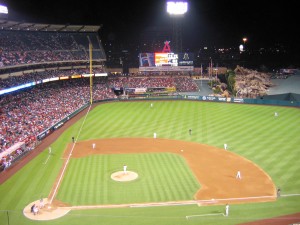 Ballpark Nerd acknowledges that it’s Southern California and you’re probably going to drive however Angel Stadium is also served by Amtrak and Metrolink as well as Resort Transportation for fans staying at one of the local hotels. END_OF_DOCUMENT_TOKEN_TO_BE_REPLACED

Orange County, California…the OC, surf and sand, horrendous housewives, a ridiculous FOX melodrama and baseball. Los Angeles Angels of Anaheim baseball isn’t the first thing most people think about when the OC comes to mind, although the Angels have called the OC home since 1966. The Angels’ presence in mainstream America would not show until their 2002 World Series victory, when a team of gritty contact hitters and a great bullpen overcame a 5-0 deficit in Game 6 to defeat the San Francisco Giants. The Angels’ World Series run was aided by the Rally Monkey, a primate dressed in Angels’ paraphernalia encouraging Angel fans to root, root, root for the home team. Since their ascension onto the national stage, the Angels have been sold to Arte Moreno (baseball’s first majority Hispanic owner), changed the name of the franchise to the Los Angeles Angels of Anaheim from Anaheim Angels, and set attendance records in consecutive seasons (3.4 million fans in 2006). END_OF_DOCUMENT_TOKEN_TO_BE_REPLACED

April 28, 2012: Miami, Florida There are few instances in my life where procrastination has paid off. Waiting five years to share my Marlins Park experience is one of them. On Friday August 11th, Jeffrey Loria agreed to sell the Marlins to an … END_OF_DOCUMENT_TOKEN_TO_BE_REPLACED

May 23, 2010: Minneapolis, Minnesota Minnesota, Land of 10,000 Lakes and one of the finest ballparks in Major League Baseball. Target Field made its debut in 2010 and ushered in a return to open-air baseball for the Minnesota Twins. The Twins’ … END_OF_DOCUMENT_TOKEN_TO_BE_REPLACED

April 17, 2009: Queens, New York Since becoming a Mets fan in 1988, I’ve followed them through the highs and lows of the past 28 years. Unfortunately, the highs have not been as high as the lows have been low. This was on display during the Mets’ … END_OF_DOCUMENT_TOKEN_TO_BE_REPLACED

August 14, 2008: The District of Columbia Since MLB relocated and rebranded the Expos from Montreal in 2005, the Nationals have carved out a niche in the nation’s capital. The Nationals played their first three seasons in the District at RFK … END_OF_DOCUMENT_TOKEN_TO_BE_REPLACED