It’s been almost 18 years since I was a Freshman at Fordham University in the Bronx.  It was during the Yankees dynasty, that I chose to pledge my allegiance to the crosstown Mets. Fortunately Fordham was full of Met fans despite being a few stops on the D Train away from Yankee Stadium.  One of those fans, Paul Nigido, was also one of my Resident Assistants helping poor little freshman like myself navigate college life.  I met Paul during one of his RA Programs, a Thursday night Mets game. Studying for my Math quiz the following day took a backseat to checking out the Mets as they pushed for the playoffs.

Since that night Nigido and I have followed the Mets every move. Whether it’s e-mailing trade proposals back and forth or his RA Program that involved free breakfast and watching the Mets and Cubs open the 2000 season in Japan the Mets have served as a constant as we’ve both added responsibilities along the way.  I can remember Nigido picking me up in his 1988 Honda Accord, with manual locks and crank windows, on the way to Shea to see the Mets play the Giants, where I scalped two tickets in different rows or having to park in the auxiliary parking lot which felt like miles away from Shea for hat night against the Royals.  My favorite Nigido ballpark story was when we were tailgating before a Sunday night Mets Yankees game in 2003. Apparently open container laws applied to our parking lot and we, along with Nigido’s friend Neumann, were given citations for drinking. The cops told us we could sit in our car and drink or find red cups.  The cover image for this post is a picture we took together with our beers and citations.

This is the first edition of Nine with the Nerd, nine questions related to ballparks, baseball and the fans who want to remember them. If you would like to share you story drop me a line at ballparknerd@gmail.com

The Mets, the first year I followed baseball they won the World Series. My first baseball jersey was Keith Hernandez and I had Doc and Darryl pictures in my room.  Over the years I have professed my love for Mike Piazza, who the Mets acquired in 1998. During my time at Fordham I had a life size cut out of him in my room.  It was a real chick magnet. 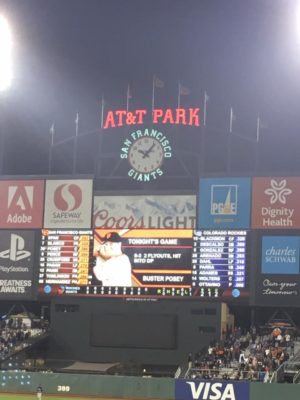 1 game in San Francisco on a business trip. I bought my ticket on SeatGeek and read up on Ballpark Nerd’s AT&T Park Concierge page. 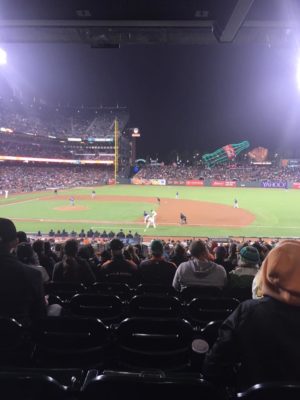 Maybe a Mets game or two.

My parents bought Sunday season tickets for the Mets when I turned 16.  The Mets were awful, but we needed to find a family activity we all would enjoy. Anyway – one Sunday Shea was empty so we moved our seats. I was with my friend Neumann. We sat there for a few innings and it was warm. Neumann decides that we are going to move – as soon as we move Mets utility infielder Tim Bogar hits a lazy fly ball that lands in the exact seat that I was previously sitting in. It was my only chance at foul ball.

April 28, 2012: Miami, Florida There are few instances in my life where procrastination has paid off. Waiting five years to share my Marlins Park experience is one of them. On Friday August 11th, Jeffrey Loria agreed to sell the Marlins to an … END_OF_DOCUMENT_TOKEN_TO_BE_REPLACED

May 23, 2010: Minneapolis, Minnesota Minnesota, Land of 10,000 Lakes and one of the finest ballparks in Major League Baseball. Target Field made its debut in 2010 and ushered in a return to open-air baseball for the Minnesota Twins. The Twins’ … END_OF_DOCUMENT_TOKEN_TO_BE_REPLACED

April 17, 2009: Queens, New York Since becoming a Mets fan in 1988, I’ve followed them through the highs and lows of the past 28 years. Unfortunately, the highs have not been as high as the lows have been low. This was on display during the Mets’ … END_OF_DOCUMENT_TOKEN_TO_BE_REPLACED

August 14, 2008: The District of Columbia Since MLB relocated and rebranded the Expos from Montreal in 2005, the Nationals have carved out a niche in the nation’s capital. The Nationals played their first three seasons in the District at RFK … END_OF_DOCUMENT_TOKEN_TO_BE_REPLACED