Don’t let the triple digit heat of Phoenix stop you from making a trip to see the Diamondbacks. Chase Field was the first retractable roof ballpark to include a grass playing field. The roof is kept open during the day for the grass to grow and closed a few hours before first pitch. A high capacity HVAC system drops the temperature to a comfortable level for fans to enjoy the game. Chase Field is also the only MLB ballpark with a swimming pool in RF, so if you are traveling 35 deep see if this Field Level suite is available.

Earlier this week I wrote about how on occasion all the time spent following baseball and traveling to games is worth the investment. Tonight I am here to say next time you think about taking a day off of work to travel 13 hours round trip to watch a game… stay home and catch it on MLB Extra Innings or your local regional sports network.  On Thursday I traveled to New York via car, New Jersey Transit and Long Island Railroad to watch the final game of a three game series between the Mets and Diamondbacks. END_OF_DOCUMENT_TOKEN_TO_BE_REPLACED 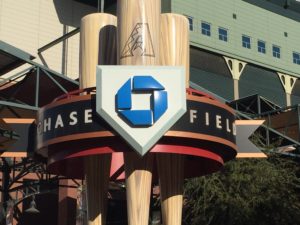 My trip to Arizona was not only an opportunity to attend an Arizona Diamondbacks game at Chase Field (formerly Bank One Ballpark aka the BOB), but also a chance to spent time with a part of my family that I do not see often. Over the past decade, many of my relatives have relocated to the Phoenix area, the first of which was my godmother Katharine, who enjoyed the dry air and open space the Arizona desert provides. Over the past decade, Arizona’s population has exploded. It attracts newly retired couples and young families looking for a change of pace. This surge in population, along with the success of Spring Training in Arizona, enabled Major League Baseball to award a franchise to the Grand Canyon State. The Arizona Diamondbacks made their debut on March 31, 1998; since that first game, nearly 45 million baseball fans have packed Chase Field, as the hometown Diamondbacks have enjoyed unprecedented success for a one-time expansion team, winning the 2001 World Series. END_OF_DOCUMENT_TOKEN_TO_BE_REPLACED

April 28, 2012: Miami, Florida There are few instances in my life where procrastination has paid off. Waiting five years to share my Marlins Park experience is one of them. On Friday August 11th, Jeffrey Loria agreed to sell the Marlins to an … END_OF_DOCUMENT_TOKEN_TO_BE_REPLACED

May 23, 2010: Minneapolis, Minnesota Minnesota, Land of 10,000 Lakes and one of the finest ballparks in Major League Baseball. Target Field made its debut in 2010 and ushered in a return to open-air baseball for the Minnesota Twins. The Twins’ … END_OF_DOCUMENT_TOKEN_TO_BE_REPLACED

April 17, 2009: Queens, New York Since becoming a Mets fan in 1988, I’ve followed them through the highs and lows of the past 28 years. Unfortunately, the highs have not been as high as the lows have been low. This was on display during the Mets’ … END_OF_DOCUMENT_TOKEN_TO_BE_REPLACED

August 14, 2008: The District of Columbia Since MLB relocated and rebranded the Expos from Montreal in 2005, the Nationals have carved out a niche in the nation’s capital. The Nationals played their first three seasons in the District at RFK … END_OF_DOCUMENT_TOKEN_TO_BE_REPLACED